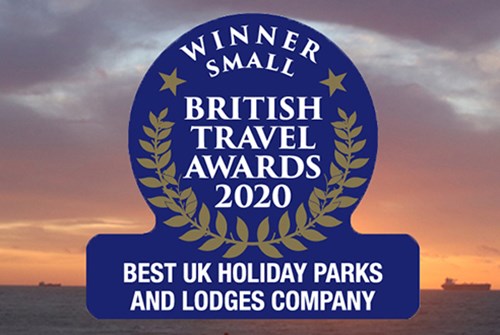 Waterside Holiday Group has been announced as the winner of Best Small UK Holiday Parks and Lodges Company in the prestigious 2020 British Travel Awards. Usually a live event, this year’s Awards were announced by TV presenter Alex Jones, at a virtual ceremony, broadcast live from London on 14th December.

Following a difficult year for the travel industry we’re delighted that the hard work of our team has been recognised with Waterside Holiday Group being awarded the Best Small UK Holiday Parks and Lodges Company at the British Travel Awards 2020.

“Waterside Holiday Group is to be congratulated on winning Best Small UK Holiday Parks and Lodges Company in this most difficult year for the travel industry.

“The winners of the British Travel Awards are decided by votes from the travelling public and despite many people being unable to take a holiday this year some did manage to, before and between lockdowns. We also asked voters to show their support for companies they had a good experience with, paying attention to customer service – recognising companies who had helped them with re-bookings, refunds and cancellations. The British Travel Awards is still the largest consumer voted awards in the UK and congratulations to all the worthy winners. We’re looking ahead and forward, all being well, to travelling again soon.”

About The British Travel Awards